Synopsis:
The Spirit of Love is Forever….

An Apache girl’s life is interrupted by the arrival of a handsome Comanche Warrior.  Their sudden and powerful love is forbidden. She is to be married to another who she does not love. These feelings of love lead them both to decisions and actions that go against tradition and their tribes. A historical legend across many cultures, love, tragedy and spirit are central to the story. Set in 1620 before European contact or influence. Shot on and around a 3000 year old Apache settlement near the Big Bend National Park of Texas.  The film includes all Native American actors and is spoken in Apache and Comanche languages with English sub-titles. Natural untouched landscapes and native music further complete the story. 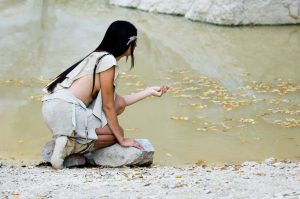